Mixing it up this year, I decided to make the trip out to Spearfish, SD on Labor Day weekend for the Dakota Five-0, a 50-mile endurance mtb race of mostly singletrack and no shortage of climbing.

The race was HARD. Not so much in the technical nature of the trails, but more in the length of the race. The leaders finished in 3:45, and I was about 15-mins back at 4:00 even at 15th place. 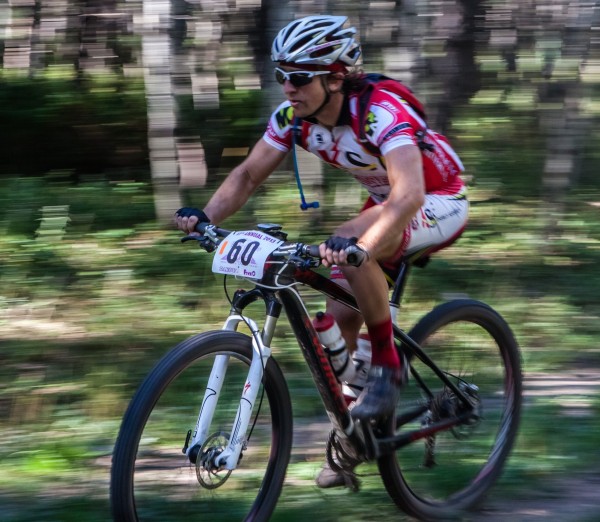 Making the trip out there was me Evie and our friend Ben and boy was it worth it. The few days leading up to the race we got out and rode the trails and they were some of the most fun singletrack I’ve ever ridden. Hilly, flowy, and fast!

The race kicked off with a 2-mile climb up this gravel road which forced a selection pretty quick. I was riding in the front group of 10-12 as we headed into the singletrack, right where I wanted to be.

When you’re racing in a local WORS race you know all the riders and everyone’s abilities. Traveling across the country to race you lose this capability. There were a few familiar faces in the likes of Nathan Guerra, Brian Eppen, and Trevor Olsen. A few guys stood out with prominent kits, but otherwise I was going in blind.

We spent the first 23-miles mostly climbing. I think I had something like 4500 feet after 1.5 hrs. The climbs were long and grinding, my kind of climbs. I put a dig in on Dakota Ridge, one of the harder and longer climbs on the course. I managed to drop the group I was with and then put more time in on the descent. I felt good at this point, but knowing there was still around 2.5-hrs left I knew I had to stay in control, keep fueling and manage my fitness as best I could.

I finished the last 3rd of the race by myself, knowing that everyone would be riding at their own pace by this point. As soon as I hit mike 36 I knew I was home free because the last 14 miles was mostly downhill.

Crossing the line felt amazing, and the after party of free beer and food for racers was even more awesome. Pretty satisfied in my finish for my first marathon style race and I’ll definitely be back again to ride the trails in Spearfish!

The Cheq 40 is pretty much the cap to the mountain bike season and this was it’s 31st year running, needless to say there’s a ton of talent and history here.

After slating the D50 into the picture this would be my 10th weekend in a row of racing and traveling. Looking back, my only real weekend off of racing was before nationals in June. This season has had a lot of high points and I have a lot to be proud of, but I really wanted to cap things off with a top 25 in the Cheq 40.

The race started out pretty tame. A mass start roll out keeps things somewhat controlled and as long as you tuck and hide from the wind on the highway before Rosie’s you can conserve energy. I made sure to come around to the front just before Rosie;s and was in good position (although the left pro line was fenced off this year).

Once we hit Rosie’s field I knew things would start to break up so I made sure to stay on it through the descent. As we hit the first few Birkie rollers the front group of 20 or so riders opened up a gap and I settled in behind the riders in my group. I wasn’t going to burn any matches to chase this early in the race.

The rest of the race was pretty textbook. Conserving energy on the gravel roads, staying near the front of the group (but not on the front), and carrying your momentum through the corners to conserve energy and move up as needed were all things I made a conscious effort of doing.

The most defining point in the race is Fire Tower climb 3/4 of the way through the race. As we passed mile 28 I knew it was time to get to the front. Moving to the front at the right time just before Fire Tower allowed me to lead up the climb and ride my own pace without worrying about other riders. Once we crested the top and made the bombing descent down I looked back and our group was down to about 5 guys from 20, perfect.

In the last few miles it was myself, Dallas Fowler, and Justin Reinhardt. I rolled in just behind Dallas for 27th overall and I was more than satisfied as I raced a flawless race, doing what needed to be done, putting myself in the right place at the right time.

Sometimes you try and turn yourself inside out pushing as hard as you can early in the race until you begin to fade and hope you don’t fall to far back. This race was more about delivering a realistic result to cap off the season on a high note.

Now that I’ve finished Ore to Shore and Chequamegon in the top 30 and been inside the top 10 in WORS, I can feel more comfortable taking bigger risks in hopes for bigger rewards. Another result for the race resume, but more importantly a mental boost to carry through the off season.