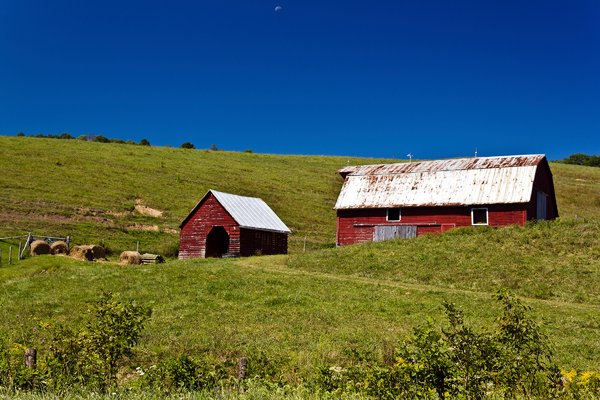 Well… a LOT has happened in the last month since my last post. For starters, Evie and I are engaged! Racing has begun, and I kicked things off with a win at the Hedge Hog Hustle in Arizona.

February was a pretty wild month with some unexpected travel and happenings, but such is life. If I’ve learned anything from my closest friends and teammates is that you have to be able to roll with the punches and adapt to unexpected situations.

Evie came to visit in February which among other things meant amazing home cooked meals and fun portable snacks for on the bike :p. I was excited to introduce her to my Arizona friends and show her around.

There’s nothing better than ripping around on the local trails with your best friends and the past few weeks have been just that. I had planned a trip up to Sedona to which turned into a trip to Sedona plus Prescott and Flagstaff.

I secretly planned on proposing at Slide Rock park up in Sedona and after a fun hike along the river we sat down for a picnic that we’d packed with some wine and a little music and I got down on one knee and popped the question.

She said yes! And we’re set to get married on July 5th. 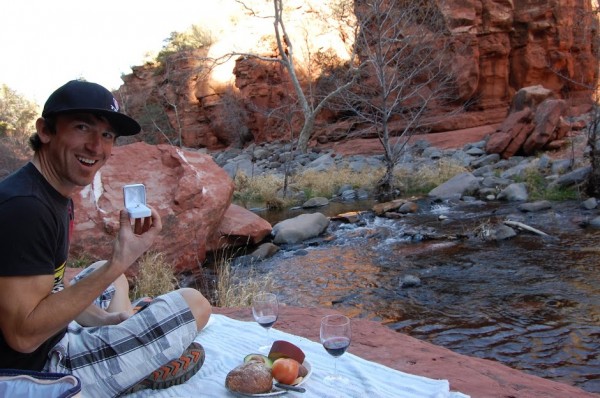 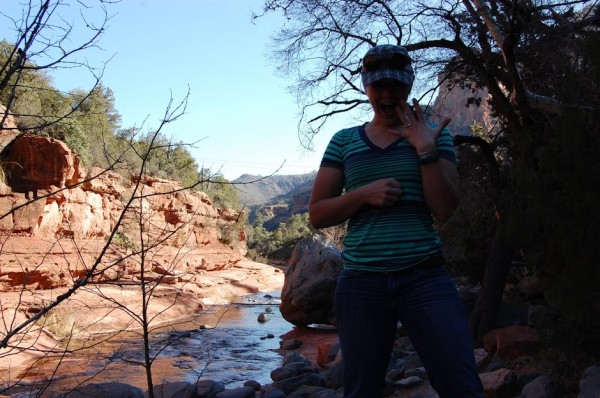 Along with growing my hair out (the #1 best way to make yourself faster on the bike), I upgraded to an XX1 group on my hard tail. Complete game changer. Not only does it remove the likelihood of dropped chains, it opens up a world of possibilities for suspension designers with free range of shock placement since there’s no need of a front derailleur and cable routing. 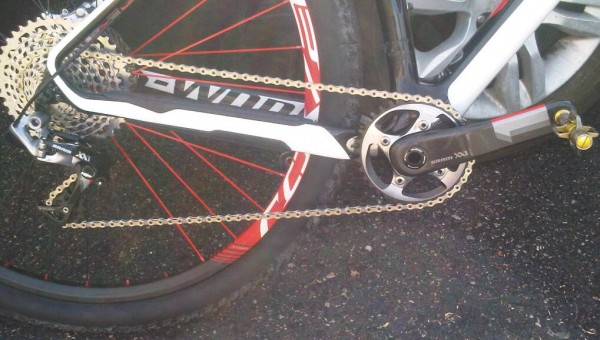 I never realized how much I use my front shifter until I jumped back on my Top Fuel. The 1x setup is phenomenal. We liked it so much Evie put it on her bike with a 32t up front and is crushing it!

I’m running a 34t up front and the 10-42 in back. I rode up and over four peaks, a monster climb and bombing with no problems on either end of the range.

I also went ahead and ordered a Wolf Tooth 36t for my Top Fuel to run with my 11-36 tooth cassette. After talking with a few other riders who already made the switch I’m stoked to get that setup and rock the 1×10 on the trail bike! 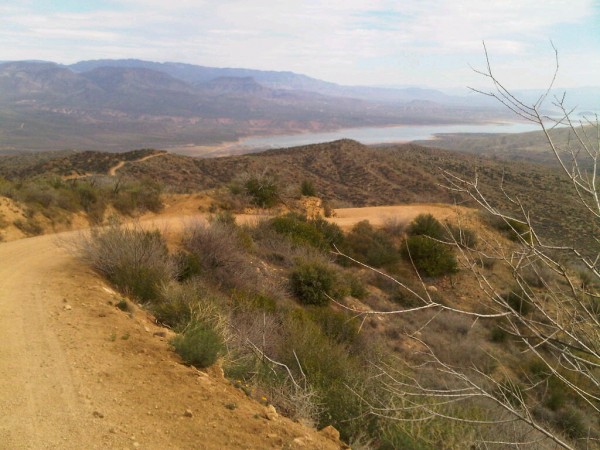 As I finished up the base miles portion of my pre-season “training,” my rides were getting bigger and more epic. I put in an incredible 10,000 ft day at Four Peaks with one of the coolest gravel descents overlooking Roosevelt Lake the entire way down.

The next weekend Evie and I headed down to Tucson to conquer the beast of Mt. Lemmon which this time, ended up getting the better of us. As we approached the halfway point the temperatures started to plummet and fog started to roll in, and a wet mist filled the air.

Wayyy underdressed with just a pair of arm warmers and a vest I fought my way to the observatory, the highest point on Mt. Lemmon at 9,157’. It way maybe 20 degrees and I was cold and wet. I started my descent and met up with Evie at the Summer Haven peak at 8,000’ and we started our hour long descent. 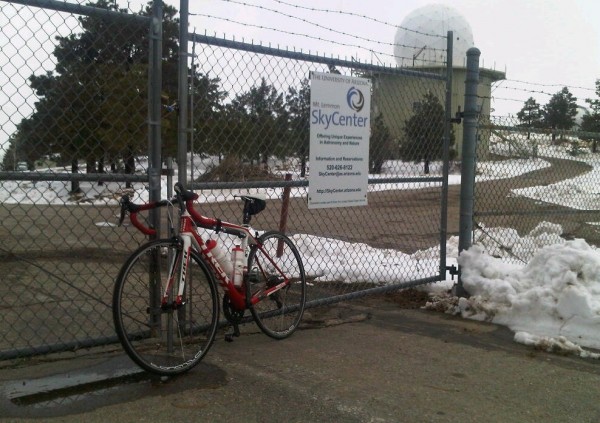 I’ve ridden in some cold temperatures, even a few sub zero, but this is the coldest I’ve ever been on the bike. 20 degrees, snow, and at altitude, it wasn’t until we got to the bottom, got changed and went to dinner that I finally thawed out. Some call those character building rides; if that’s the case I’m now Mickey Mouse.

Racing begins with a Big W (that stands for Wisco!)

The mountain bike racing season began for me on Saturday with Arizona’s mountain bike series #4 Estrella Hedge Hog Hustle. I hadn’t ridden this course in 4 or 5 years, but all I could remember is it’s a real mountain biker’s course. Rugged, rocky, a few grinder climbs, some fast descents, and a couple really long tech sections. I was pumped.

No series can hold a candle to WORS, but the Arizona mountain bike series does put on great events with pretty descent turnouts (the first race of the season pulled in 700 riders). For this race though, it was a little further out so there were 6 pros and 20 or so Cat 1 racers.

Just like a WORS race the pros and cat 1’s started at the same time. It was cool to see some familiar faces as TJ Woodruff lined up along with Brian Matter. The gun sounded and we were off.

Early season races are all about blowing out the cob webs. I think it’s important to use these races to determine where you’re at fitness wise, practice various aspects of your race routine, and flat out remember HOW to race. 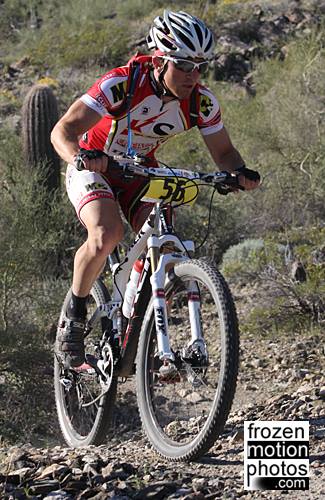 Local races are great for this, and it’s an awesome way to get in a tough workout, figure out what things you need to still improve on, and get back into the racing groove.

It’s no secret… I’ve been training, a lot. This was only my first week of real structured intervals, but I’ve been putting a lot of hours in. I was second row right behind the pro guys and my first objective was simply to stay with the front group, and I did.

The race consisted of two long loops (10-miles) and two tech loops (5 miles). I felt okay at the start and after some jockeying for position amongst the pro riders I jumped in 5th wheel.

TJ lead the group up a gradual climb where a group of three, TJ, Brian, and one other pro rider opened up a good 15 second gap. I made a jump around the rider in front of me once the trail opened up before a good 2 miles of twisty tech trail and managed to close the gap by the end of the section and jump onto Brian’s wheel.

The lap finished with a 3-min gradual climb and bombing descent so at the start of the climb I attacked because well, why not. I dug in and lead up the climb, but it wasn’t long before TJ came around at the top and we started the descent to lap 2.

I stuck with the lead group for the start of the 2nd lap, but TJ and Brian turned it up again on the gradual climb to the tech section and my legs weren’t able to hang on so I just settled in and finished out the race for a 1st place in Cat 1, 4th overall.

It felt great to race, great to win, but even better to know that my hard work the past few seasons is starting to pay off. Every so often in the race I’d glance at the time, 20-mins, 1-hr, 1.5-hrs and think to myself, okay am I about to blow up, but it never came I felt good (relatively speaking) for the entire race and finished just a couple minutes off the leader (Brian), who I should also mention, was on his remedy :p 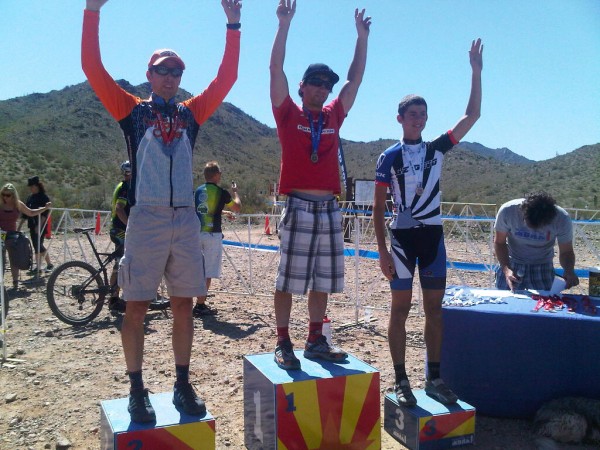 The next day we hit the trails at McDowell for a 4-hr jam session with the girls and had a blast! That’s what mountain biking is all about!

Thanks to Mike’s Mix for helping me recover through these big training weeks, Team Wisconsin Cycling, Jake over at Fit Squared, and Evie, you guys rock!

And thanks for reading!

I’ve also brushed up my web design portfolio, feel free to check it out.

2 Replies to “Midwest Love – Racing and a Wedding”