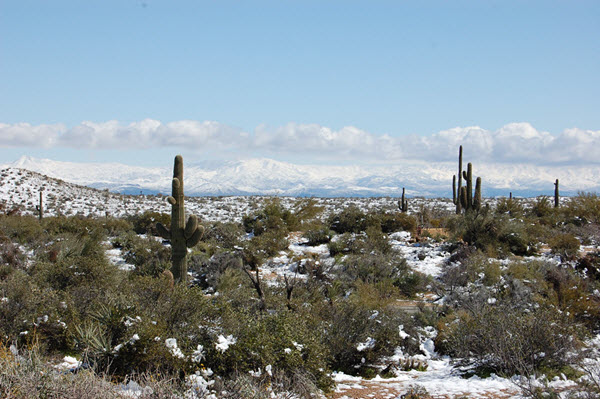 There’s something magical about the desert in the winter time, especially after a good rain (which we’ve had plenty of this year). The flowers pop, the mountainside is covered in bright green grass, not what you’d expect in Arizona, and snow!

We had a massive winter system come through AZ this past week that dumped record snow up north in places like Flagstaff, something like 36 inches in 24-hrs. The snow made it all the way down as low as Scottsdale which is pretty rare to see, let alone have inches of standing snow for a few days.

At the end of January I did a big two week block of training, one of my favorite two weeks of the year where I map out new (and some old fun) routes to explore by bike. This year I went to all 6 major dams in the area including 4 on the Salt River Canyon where Arizona gets it’s drinking water. Some new higher tech gates prevent you from getting quite as close as in years past, but I was able to walk out onto the spillway of Horseshoe Dam because water wasn’t flowing.

Race wise, I knocked off Estrella and Havasu, races 2 and 3 in the MBAA series. It’s fun to be able to jump into some early season low pressure races with good competition to prime the engine for the bigger races to come. Next up is Cactus Cup in March, then the big races start in April with the Whiskey Off-Road.

This is the time of year for visitors. Ryan and Cole stayed the weekend to race Estrella. Evie’s mom Connie came out to escape the cold of South Dakota and our friends Chloe and Rose stayed with us for a training camp they were doing here in the valley. Then my sister and brother in-law paid us a visit. We had a great time hiking, playing Top Golf, and enjoying the sunshine.

One Reply to “Bike Adventures & Playing in the Snow”