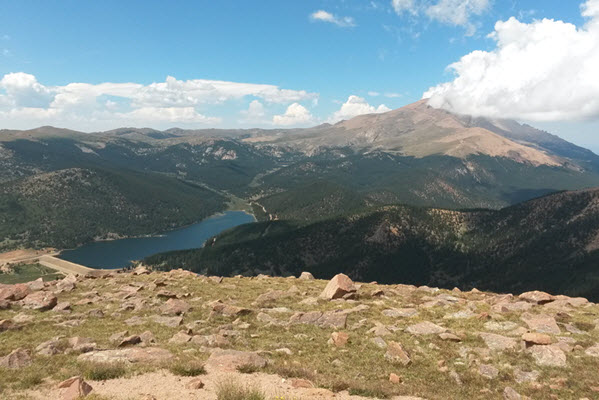 Boy, looking back the past 9 months have been a pretty good time. Evie and I got to explore a lot of cool places this summer, try out some new races and meet some new faces.

In August we went out to Steamboat Springs for the Steamboat Stinger 50 miler. That was a tough one on trails I’ve never ridden. I managed to pull out a 4th place. Then came the super fun Labor Day weekend in the Black Hills of South Dakota for the Dakota Five-O.

The Dakota Five-O is always a blast and this year was no different. More and more Wisconsin peeps are coming out every year which is turning it into a reunion since so many of us have moved away. This year Chris and Michelle and the Adventure 212 crew came out along with Brian and Corey.

Spearfish is a great town and it’s always a great week camping at Spearfish Park. We got a spot right next to the creek this year which was perfect. Evie and I did a bunch of hiking along with pre-riding. My parents were passing through on their trip to Banff so we saw them a bit. Hit up the ice cream joint downtown along with a few glasses of wine and beers.

As for the race itself, I ended up getting a flat about halfway through that I wasn’t able to keep booted, even after hiking back to the aid station and lining the sidewall with duct tape. I think the wet tires had something to do with it because there were a lot of sidewall tears by good riders this year and in years past I rarely heard of anyone getting flats.

Bummed on not being able to finish, I still had a great time and will have another go next year.

After Dakota I took on a new challenge of racing above 8000′ at Outlier Vail. Maybe it was the spectacular views, or maybe I just paced it well, but after climbing for over an hour cresting out at 11,500′ I felt alright. No headaches, no bonking, my goal for the day was achieved so ripping down to the lodge on singletrack was a bonus!

Fire on the Rim

Last weekend I raced in Strawberry-Pine, AZ at Fire on the Rim. A super challenging 45 mile race that takes you up a long gravel road climb from the start before getting into some fast doubletrack and chunky, rocky, good singletrack. I got the win, which was a great way to end the season!

Sunday Evie and I went Salt River Tubing for the first time. It was a blast floating down the river through the Salt River Canyon and a great way to start off season! Lots of new exploring to be had this fall, our list of places keeps growing!

Thanks to all the awesome support this season from first and foremost Evie. Then all the guys at McDowell Mountain Cycles, Mike’s Mix, Crank Brothers, and everyone who came out to cheer me on!